In 1963 Mr Buch, Belgian State Councillor, has paid a visit to the Italian Council of State. It is probably during a conversation with President Bozzi that the idea occurred to organize a meeting with some delegates of the Italian and Belgian Councils of State.

The idea gained ground and materialized when both institutions met in Brussels on 7th, 8th and 9th December 1964. The four following themes were examined on that occasion:

The Council of State of Italy also initiated bilateral meetings with the four other corresponding jurisdictions from the countries that belonged to the "Common Market", as it was then called.

Considering the importance of these meetings, the Council of State of Italy decided to organize a colloquium of the supreme administrative courts of the six member states of the Common Market.

This colloquium took place in Rome on 4, 5 and 6 March 1968. The topics were: the consultative functions of the Councils of State and the drawing up process of administrative acts. 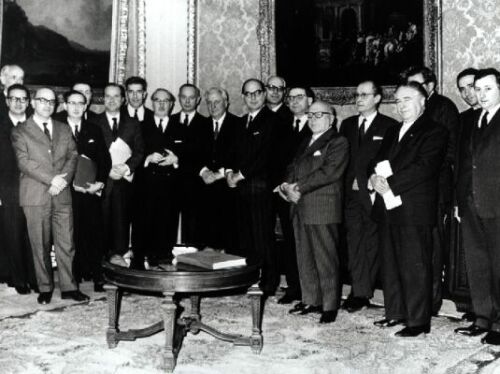 The participating delegations noted in the conclusions of the colloquium that there was a very clear convergence between the decisions of the administrative courts in the six E.E.C. countries. They consequently expressed the wish to go on with organizing such colloquiums.

This wish came true and the colloquium of Rome was the first one of the 21 colloquia that have been organized every two years until now.

During the 16th colloquium that has been held in Stockholm from 14 to 17 June 1998, it has been decided to create an association of the Councils of State and the Supreme Administrative Jurisdictions of the member states of the European Union.

The statutes of the new association have been adopted during the 17th colloquium held in Vienna from 8 to 10 May 2000.

At the General Assembly on 15 June 2004, the relevant institutions from the 10 new EU Member States became members of the Association. The new members are:

During the General Assembly that has been held on the 6th of June 2005, the Council of State of Türkiye has been admitted as observer of the Association.

The General Assembly that has been held on the 29th of May 2006, admitted as observers of the association:

The Supreme Administrative Court of Bulgaria and the High Court of Cassation and Justice and the Legislative Council of Romania became members of the Association on 1 January 2007.

The General Assembly that has been held on the 13th of May 2013, admitted the Supreme Court of Montenegro as observer of the association.

The Administrative Court of Croatia became member of the Association upon the accession of Croatia to the European Union on 1 July 2013.